Express hold off Nicks in first round of CVL playoffs

KIMBALL ?Äì It was perhaps the best game the St. Nicholas Nicks played all season, and it came at an important time: the first round of the Central Valley League playoffs.

But the Nicks?Äô effort wasn?Äôt quite good enough to topple the top-seeded Cubs, and Kimball held on for a 4-3 victory. St. Nicholas finished the regular season with an 0-14 record while Kimball registered a 12-2 record.

The Nicks came out playing good baseball and took a 2-0 lead in the top of the first, thanks to a single by Joe Wehlage which was followed by a two-run home run off the bat of Jon Hofer. Hofer was 2-for-4 on the day.

The score stayed that way until the bottom of the third when the Express scored on an infield single by Adam Beyer that plated a run.

The Express took the lead in the fifth when it scored two runs on an RBI double by Brian Marquardt and a sacrifice fly by Jordan Joseph.

The Nicks mounted a comeback in the eighth thanks to a single by Robert Lutgen that drove in a run.

Express catcher Scott Marquardt continues to swing a hot bat as he was 3-for-5 on the day.

Zach Dingmann got the start and the win for the Exprss throwing six innings. Andy Dingmann came into the game in the seventh and gave up one run over two innings. Jordan Joseph pitched the ninth to record the save.

Hofer pitched five innings for the Nicks allowing all four Express runs. He was relieved by Derek Kuechle in the sixth. He held the Express off the scoreboard the rest of the way.

Travis Hansen was 2-for-5 for the Nicks and Robert Lutgen was 2-for-4 with an RBI and a stolen base.

Express manager Tom Marquardt was happy with the win but a bit disappointed with his team?Äôs play as Kimball committed four errors.

?ÄúBeing a playoff game, seemed like we certainly lacked some intensity,?Äù Marquardt said. ?ÄúBut give St. Nicholas credit. Entering the playoffs without a league win, certainly they didn?Äôt just roll over. They pitched well, played solid defense, and got the lead early with Jon Hofer?Äôs two-run home run in the second inning.?Äù

But Marquardt will take the victory
regardless.

?ÄúIt?Äôs a good sign of a good team: you have to win some ugly games,?Äù he said. ?ÄúA win is a win.?Äù

The Express will play an exhibition game with the Cold Spring Springers at 7:30 Wednesday night, July 16, in Cold Spring against one of the premier teams in the state in hopes of getting back into high gear for hosting Luxemburg at 2 p.m. Sunday, July 20.

LUXEMBURG ?Äì Isaac Matchinsky was 3-for-4 with a two-run homer and five RBI as the Brewers beat the Gussies 11-5. Adding to the Brewer firepower were Greg Terres who clubbed a three-run homer, and Cory Wenz who was 2-for-3.

COLD SPRING ?Äì The top-seeded team in the CVL South needed all nine innings to defeated fourth-seeded Eden Valley 7-6 as John Rossman laid down a suicide squeeze to plate David Jonas. The Rockies had to score twice in the ninth as the Hawks were ahead 6-5 entering the frame.

John Porwoll had a big day hitting as he was 3-for-3 ?Äì all doubles ?Äì and drove in two runs. Ryan Bell was 2-for-4 with a home run and two RBI for the Rockies.

The Hawks were led at the plate by Josh Schumacher who was 2-for-5 with two RBI and two runs scored. Jake Anderson was 2-for-4 including a double.

WATKINS ?Äì It didn?Äôt take long for the Clippers to put the game away as they plated 13 runs in the first inning and sent 17 batters to the plate to trounce Pearl Lake 15-5.

The hitting stars were numerous for the Clippers: Adam Hiltner hit a grand slam; Dan Berg was 3-for-5 with a double and RBI;
Brendon Ashton was 3-for-4, and Miah Kramer collected four RBI.

Berg picked up the win on the hill going six innings of the seven-inning game.

For the Lakers, Justin Kunkel was 3-for-4, and Tommy Linn was 2-for-4. Bryan
Hennen slugged a three-run homer
in the losing effort.

If you like offense, the Watkins win over Pearl Lake was perfect. Twenty runs were scored on the day, including 13 by the Clippers in the first inning when they sent 17 batters to the plate.
Staff photo by Jean Doran Matua. 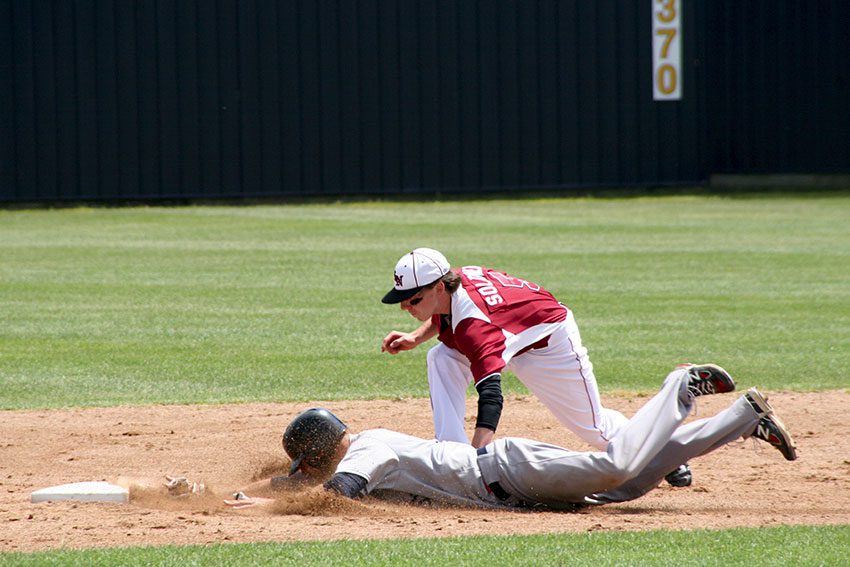 Express second baseman Brian Marquardt was called out on an attempted steal of second base against St. Nicholas Sunday. Staff photo by Mike Nistler.