Worked in Forestry Protection and Improvement in Minnesota

The Civilian Conservation Corps, the enormously successful Depression-era program of Franklin D. Roosevelt?Äôs New Deal, was all that and more. The CCC put unemployed, impoverished young men to work in forestry, soil conservation, drainage, and public parkland.  Known for its quality of work, the imprint of the CCC remains in parks, forests, and farmlands today, including in Minnesota.

?ÄúThe impact of the CCC across the nation cannot be understated,?Äù said James Denny, a retired historian with the Missouri Department of Natural Resources who has extensively studied the CCC. ?ÄúThe work that the CCC did in parks was
tremendous, and the CCC put people back to work and helped send money home to families that needed it. It also got people into the great outdoors and into better surroundings, and gave them something productive to do.?Äù

With the nation?Äôs economy in shambles, Roosevelt spent his first days in office in March 1933 creating a multitude of programs to create jobs, including the CCC, whose official name was ?ÄúEmergency Conservation Work.?Äù On March 21, Roosevelt sent his plan for the CCC to Congress, stressing the ?Äúmoral and spiritual value?Äù of conservation work to ?Äútake a vast army of ?Ä¶ unemployed out into healthful surroundings.?Äù

Men stand and wait in a field serving line during a day?Äôs work in the Civilian Conservation Corps near Carlinville, Ill. The CCC provided unemployed young men with $30 per month with food, shelter, and medical care during the Depression.

Ten days later, Congress approved the plan. The first man enrolled in the CCC was Henry Rich in Alexandria, Va. on April 7, 1933, only five weeks after Roosevelt?Äôs inauguration. By June, some 253,000 were enrolled across the nation. 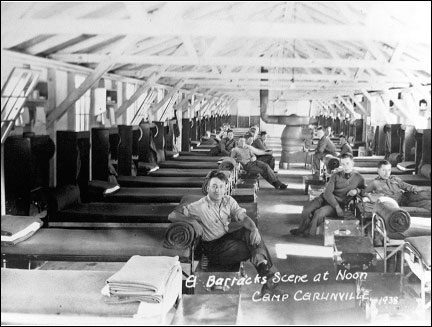 24 buildings, including barracks, a mess hall, infirmary, educational and recreational facilities, and administrative quarters. Men received food, shelter, medical care, and $30 per month, $25 of which was sent to dependents, who welcomed the economic benefit.

Wildly popular with the public and politicians alike, enrollment in the CCC peaked at 505,782 in 1935. The program was particularly a favorite in northern Minnesota, where unemployment on the Iron Range reportedly reached 70 percent. Nationally, some 3.5 million men in 4,500 camps filled the ranks in the Corps?Äô existence from 1933-42.

Dubbed ?ÄúRoosevelt?Äôs Tree Army,?Äù CCC camps held approximately 200 men and were usually segregated. The CCC was originally designed for unmarried men ages 18-25 on the relief rolls. Native Americans, also struggling economically, were added in April 1933. The following month, World War I veterans were added and sent to their own camps, while some 14,000 American Indians also joined. In Minnesota, the CCC was active on the Dakota and Ojibwa reservations.

A panorama of the Civilian Conservation Corps camp near Carlinville, Ill., in 1938. Most CCC camps consisted of approximately 24 buildings and housed 200 men.

More than 84,000 Minnesota men were enrolled in the CCC, and an annual average of 51 camps were operated in the state during the Corps?Äô existence.

Among other achievements in Minnesota, the Corps stocked 275 million fish in the state?Äôs lakes, built 4,500 miles of new roads, strung 3,338 miles of telephone lines, and constructed 149 fire lookout towers. Numerous dams and bridges were also built, while more than 123.6 million new trees were planted. 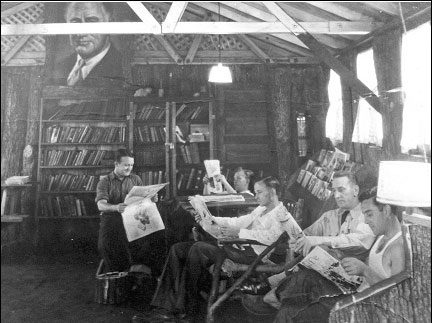 Men relax in the camp library at the Civilian Conservation Corps camp near Carlinville, Ills. Note the portrait of President Roosevelt. The CCC was part of Roosevelt?Äôs New Deal plan to help America recover from the effects of the Depression.

Today, the CCC is honored with a historic landmark in the Chippewa National Forest near Blackduck, where the former CCC installation at Camp Rabideau has been partially restored. The Corps is also interpreted at the Iron Range Research Center Museum near Chisholm, while statues to the CCC also stand in Gooseberry Falls State Park and Flag of Honor Park in Willmar.

Most acknowledge the CCC as a landmark in the conservation movement, and the economic benefits were felt not only by workers and their families, but in the towns that hosted camps, as supplies were usually purchased locally.

The CCC also left an emotional legacy, as many of its alumni never forgot the opportunity the CCC presented. Men gained twelve pounds on average in their first two months in camp, and the spartan barracks, in many cases, were an improvement over previous living conditions. ?ÄúMany men say that the CCC saved their lives,?Äù said Joan Sharpe, President of the Virginia-based CCC Legacy, a national organization of CCC veterans and enthusiasts. ?ÄúThe men were so desperate in those times, and many of them were just riding the rails. They all needed the structure and benefits that the CCC provided.?Äù

An estimated 95 percent of CCC men eventually served in World War II, and many became officers. ?ÄúThey already knew a lot about military life, since the camps were run by military officers,?Äù said Sharpe. ?ÄúWhen the war came, they put their CCC experience to good use.?Äù

Among them was Andy Kmetz, a son of Slavic immigrants from Girard, Ill. who eventually rose to lieutenant colonel in the Air Force before a successful career in soil and water conservation, skills he had acquired in the CCC. He became a tireless promoter of the CCC legacy until his death in 1995.

?ÄúThe CCC was a way for him to help his parents in a difficult time,?Äù said Kmetz?Äô daughter, Joni Mack of Moline, Ill. ?ÄúHe was so proud of everything he did in the CCC. He felt like we could all learn from, and appreciate, what the CCC did for so many young men in that time.?Äù

Historical researcher Tom Emery of Carlinville, Ill. has created a short photohistory of the CCC that sells for $12.95 postpaid. He may be reached at (217)
710-8392, or ilcivilwar@yahoo.com.