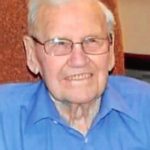 Jack was born in Watkins Feb. 1, 1926, the youngest child of Nicholas and Lorraine (Becker) Werner. He attended elementary school at St. Anthony Catholic School and graduated from Kimball High School in 1944. He married Lorraine Abeln of Richmond June 18, 1949.

Jack served in the U.S. Army from 1944-1946 – in France and Germany during World War II. He worked in the grain elevator business for 32 years with his father at the Werner Elevator in Watkins, becoming a partner in 1960 and taking over the business in 1965. He sold the business in 1978.

Jack enjoyed biking, walking, bowling, gardening, playing cards, dancing, and following the Watkins Clippers baseball team. He volunteered as a driver for Meals On Wheels, and was honored as the Meeker County Volunteer of the Year in 2008.

Jack was preceded in death by his parents, and brother Richard “Dick” Werner.

Arrangements are by Ertl Funeral Home in Watkins.