Ricky “Rick” Robinson died peacefully Friday, May 10, 2019, at the St. Cloud VA Hospital after battling lung cancer. He was 61. 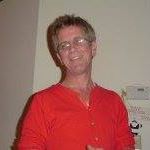 A celebration of his life will be held from 4-7 Saturday, May 18, at the Third Rail in Big Lake. There will be no visitation.

Ricky Lee Robinson was born April 8, 1958, in Minneapolis to Larry and Joan (Hokkanen) Robinson. He grew up in Brooklyn Park until the fourth grade at which point the family moved to the country on Lake Francis. He was confirmed at Redeemer Lutheran Church in Kingston. He attended Kimball Public Schools and finished his education at the Area Learning Center in St. Cloud. He graduated with his class from Kimball in 1976. Ricky enlisted in the United States Air Force and was stationed in Great Falls, Mont. He continued his education at the St. Cloud Technical College following his discharge from the Air Force, and he graduated from the accounting program there. He was a man for numbers, and he continued his accounting love and skills through this 2018 tax season.

Ricky was united in marriage to Connie Bartlett June 8, 1985, in Austin, Minn., later divorcing in 2009. From this union they had three children: David, Kasee and Mitchell.

Ricky was preceded in death by his parents, and his brother Gary Robinson.

He is survived by his children David Robinson (and fiancée Britt Saice), Kasee (and Derrek) Nelson, and Mitchell Robinson (and friend Tina Labarre); grandchildren Paisley and Dekker Robinson; siblings Dawn (and David) Underwood, Bob (and Jenny) Robinson, and Terry Robinson; stepdad Howard Fuchs; and many nieces, nephews, aunts and uncles.

The family would like to thank the doctors and staff at the St. Cloud VA Hospital for the wonderful care of Ricky during his final days. Their care and attention to his family, too, is most appreciated.

Seasonal temps by the weekend

Adaptability is invaluable at AgVenture