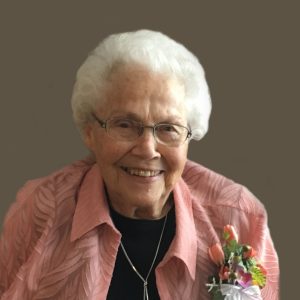 Edith May Lies was born April 22, 1928, in Fonehill, Saskatchewan, Canada, to Harry and Minnie (Cahoon) Elliott. When she was 6, the family moved to a farm near North Kingston. She helped with chores during her youth, including doing field work when her brothers were in the service. Edi graduated from Kimball High School with the Class of 1946. Following graduation, she worked as a postal clerk at the University of Minnesota, St. Paul Farm Campus. On Dec. 15, 1949, Edi was united in marriage to Gerald James Lies at St. Columbus Catholic Church in St. Paul. They raised their family in South Haven, and lived there more than 60 years. Edi and Gerry worked side-by-side in their meat locker plant from 1968-1976, and they owned and operated Lies Meats and Groceries from 1976-1982.

Edi served as the South Haven City Treasurer from 1982-1986, and as the City Clerk from 1986-1996. She was a founding member of the South Haven VFW Auxiliary. She held an office every year of the organization’s existence including the first president when the Auxiliary was formed in 1957, and the last president when it was disbanded in 2008. Edi served as South Haven’s chief election judge for 29 years, retiring following the 2012 elections. She helped form the South Haven/South Side United Charities and was active in the organization during all of its existence. She was active in the PTA for several years in South Haven.

Edi’s favorite hobbies included gardening, cooking, collecting recipes, golfing, traveling throughout the United States and Canada, reading, and making greeting cards. Her greatest joy was the time she spent with her loving husband, daughters, grandchildren and great-grandchildren. Edi was a voice of support and encouragement, a loyal friend, and a prayerful woman.

Edi was preceded in death by her parents, husband Gerry Lies, and brothers Alvin, Donald and Harold Elliott.

She is survived by her daughters Sharon (and Art) Meier of Roseville, Sandra (and Dean) Hawkinson of Elk River, and Sheila (and Dan) Scrabeck of Rochester; grandchildren Anne Reed, Heidi Bentz, Kara Schuster, and Brent Hawkinson; great-grandchildren Megan and Ali Reed, Calvin and Kaitlyn Bentz, Clark and Oliver Hawkinson, and Caden Schuster.