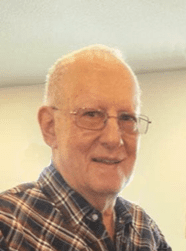 A Memorial Mass of Christian Burial will be held at 10:30 a.m. Friday, Aug. 2, at St. Anthony Catholic Church in Watkins. Friends may call from 4-8 p.m. Thursday, and from 9:30-10:30 a.m. Friday, at the St. Anthony Parish Center. Interment will be in the St. Anthony Catholic Cemetery. Jerry Klein was born Dec. 26, 1938, in Kimball to Peter and Alma (Ophoven) Klein. Jerry graduated from Kimball High School, and he served in the U.S. Army from November 1956 to November 1958.

Jerry earned his nickname “Cardboard” during his career of 50-plus years working as a cardboard salesman for St. Regis Paper Company, Georgia Pacific, and PCA. He was a 50-plus year member of the Watkins American Legion Post #453, and a long-time member of the Watkins Sportsmen’s Club. His hobbies included hunting and fishing, especially deer hunting out west and goose hunting at Lac Qui Parle. Jerry enjoyed watching Minnesota Twins and Watkins Clippers baseball, and he also enjoyed trips to the casino and his annual vacation to Branson, Mo.

Jerry was preceded in death by his parents, and siblings Mary Jane, infant Robert, Mary, Luella, and Robert “Bob.”

He is survived by his children Mark Klein of Annandale, Mitchell (and Cathy) Klein of Cokato, and Michelle Klein of Buffalo; 11 grandchildren and 12 great-grandchildren; and brothers Ron (and Shirley) Klein of South Haven, and Tom (and Deb) Klein of Richmond.

Arrangements are with Ertl Funeral Home in Watkins.

Expect above-average temps with a possible need for an umbrella