Luella Nelson of Hutchinson, formerly of Cosmos, died Friday, Oct. 4, 2019, at Harmony River Living Center in Hutchinson. She was 98. 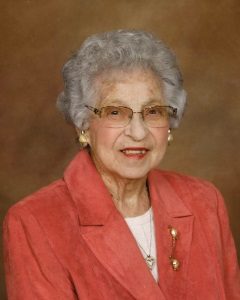 Luella Augusta Nelson was born Dec. 7, 1920, in Kimball to August and Anna (Mielke) Hoeft. Luella was baptized as an infant and was later confirmed in her faith as a youth at Kimball United Methodist Church. She received her education in Kimball, and was a graduate of the Kimball High School Class of 1939.

On Nov. 22, 1941, Luella was united in marriage to Harris Nelson at Kimball United Methodist Church. This marriage was blessed with two children, Linda and Dale. Luella and Harris lived on their farm in Cosmos until retiring in 1975. They shared 54 years of marriage until Harris died in 1996.

Luella was a farm wife and loving homemaker to her husband and children. She was an active member of Peace Lutheran Church and the Ladies’ Aide group in Cosmos. She also was a member of the Cosmos Senior Club, the Birthday Club, and Senior Meals. Luella enjoyed embroidering, baking, and watching her grandchildren play sports, especially hockey. She enjoyed being at the lake and vacationing in Florida. She especially enjoyed spending time with her family, grandchildren, and friends. Luella became a resident at Harmony River Living Center in Hutchinson in May 2017.

Luella was preceded in death by her husband, parents, and all of her siblings Erwin Hoeft, Martin Hoeft, Evelyn Abbott, Helen Olson Laitinen, Beatrice Lee, Alice Root, and Carly Hoeft, as well as her special friend Marvin Hackbarth.

Arrangements were by Dobratz-Hantge Chapel in Hutchinson.