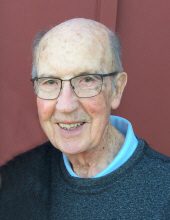 Valentine Leonard Riley was born July 8, 1932, in Freeport to Joseph and Julitta (Rosen) Riley. He graduated from Melrose High School and married his high school sweetheart Johanna “Joan” Holdvogt at St. Boniface Catholic Church in Melrose on Sept. 20, 1952. Val attended St. John’s University for two years before proudly serving his country in the United States Army during the Korean War from 1952-1954. After his service, he completed his degree in education from St. Cloud State University in 1958. Val worked as a teacher for Eden Valley-Watkins Schools for 35 years. He was very involved in his work and coached all sports, with his true passion being for coaching football; he was the Athletic Director for many years. Val also was a Driver’s Ed instructor, and he taught every one of his children how to drive. He was a member of Assumption Catholic Church in Eden Valley and participated in Adoration every Thursday. Val also was a member of the Melrose V.F.W. Schanhaar-Otte Post #7050, and the Eden Valley American Legion Post #381 where he was a past Legion Post Commander. He enjoyed hunting, camping, fishing, and watching all sports (especially football). Val enjoyed music, spending time with his family, and his retirement in Arizona. He was a very gentle, strong, kind, and caring man who had a great sense of humor.

Val was preceded in death by his parents, wife Joan in 2016, and siblings Angie Olberding, Virg Riley, and Gerri Elfering.