Marilyn Gordon, a lifelong resident of the Annandale and South Haven area, died Wednesday, May 20, 2020, at the Annandale Care Center. She was 91. 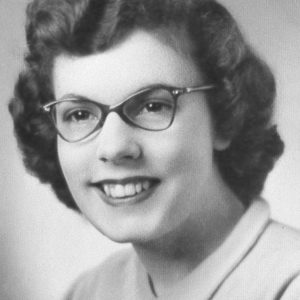 Memorial services will be held at a later date because of current limitations on gatherings.

Marilyn Janet Gordon was born Sept. 9, 1928, at her rural Annandale home to Earl and Elfreida (Pisak) Gordon. She attended school in Annandale, graduating with the class of 1946. Marilyn furthered her education at St. Cloud State University where she obtained a degree in English with a minor in Speech. Marilyn was employed with the Kimball Area Public Schools as the school librarian for 34 years, retiring in 1983. She continued to be active in several organizations, particularly Minnesota Pioneer Park where she was a lifetime member and held a variety of positions. Marilyn had special interests including the love and care of animals, history, the environment, flowers and, of course, books. She also collected animal figurines and, while she loved all animals, cats and dogs were her favorites.

Marilyn was preceded in death by her parents, brothers Ralph and Robert Gordon, sister Erma Christopher, and nephew Larry Gordon.

She is survived by her nieces Judy Bryan of St. Louis Park, and Faith (and Terry) Christensen of Hutchinson; nephews Hanford Gordon of Maple Lake, and Dennis Gordon of Burbank, Calif.; niece-in-law Betty Gordon of Maple Lake; great-nieces, great-nephews and their families; and her dog Thorby and cats Missy Mama, Georgie, and Jeffrey.