By Deane Morrison, U of M

Summer may fade in August, but that brings darker skies and longer hours to watch stars and planets.

The month starts out with a nearly full moon rising the evening of the 2nd. That night it follows Saturn and brilliant Jupiter across the sky, becoming full at 10:59 a.m. on the 3rd. However, by that time the moon will have set. To see it at its roundest, check your local time of moonset and go outside early enough to catch it before it sinks in the southwest. 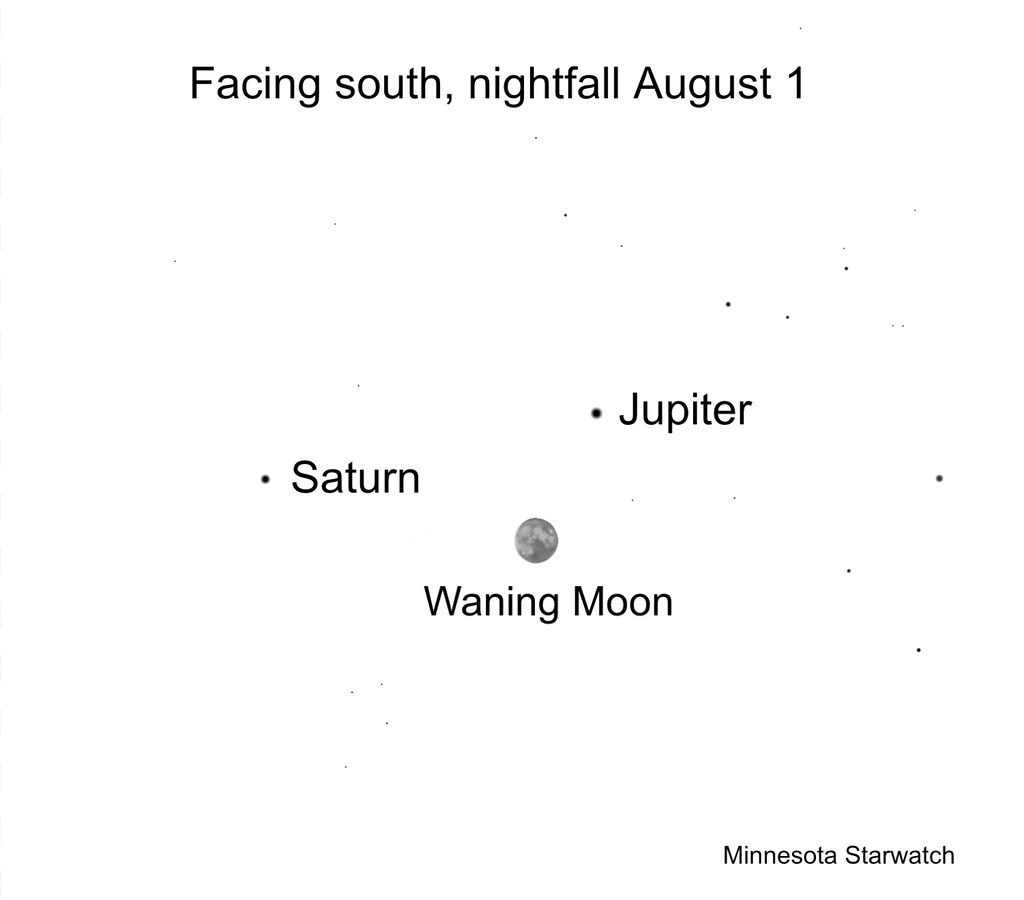 The waning moon proceeds to sail through the fall constellations Capricornus and Aquarius. On the night of the 6th-7th, it appears below the ring-shaped Circlet of Pisces, a somewhat dim figure below the brighter Great Square of Pegasus. On the 8th-9th, a still hefty moon travels the night sky with Mars.

With Earth closing in on it in the orbital race, Mars looks much bigger and brighter than usual. It’s up in the east by midnight and, surrounded by only dim stars, unmistakable. In the predawn sky, Mars is high in the southeast to south while Venus, also unmistakable, blazes away low in the east. On the 15th, Venus and a crescent moon appear next to the feet of the Gemini twin Castor.

The Perseid meteor shower is predicted to peak between late night and dawn on the 11th-12th, but the nights before and after could also be good. Typically fast and bright, Perseids stream from the northeast, and they may leave persistent trails. A bright waning moon may interfere though, depending on which day and time you go out.

When no meddlesome moon is up at nightfall, don’t miss the smörgasbord of stars. High in the west, brilliant Arcturus anchors kite-shaped Boötes, the herdsman. Immediately east hangs the semicircular Corona Borealis, or northern crown; its jewel is called Gemma or Alphecca. Next comes the hourglass of stars on the torso of upside-down Hercules.

Beside Hercules shines Vega, the peer of Arcturus and beacon of Lyra, the lyre. Below Vega, a small parallelogram of stars outlines the lyre. Moving east again, somewhat dimmer Deneb marks the tail of Cygnus the swan, and the head of the Northern Cross. To the south, Altair, in Aquila the eagle, forms the sharp point in the Summer Triangle of stars, which includes Vega and Deneb. And slightly above and east of Altair, diminutive Delphinus the dolphin leaps into a dark sea.

The University of Minnesota’s public viewings of the night sky at its Duluth and Twin Cities campuses have been curtailed because of the COVID-19 pandemic.

Find U of M astronomers and links to the world of astronomy at www.astro.umn.edu.

Thank you from Kleis family